Can HWA be Stopped? 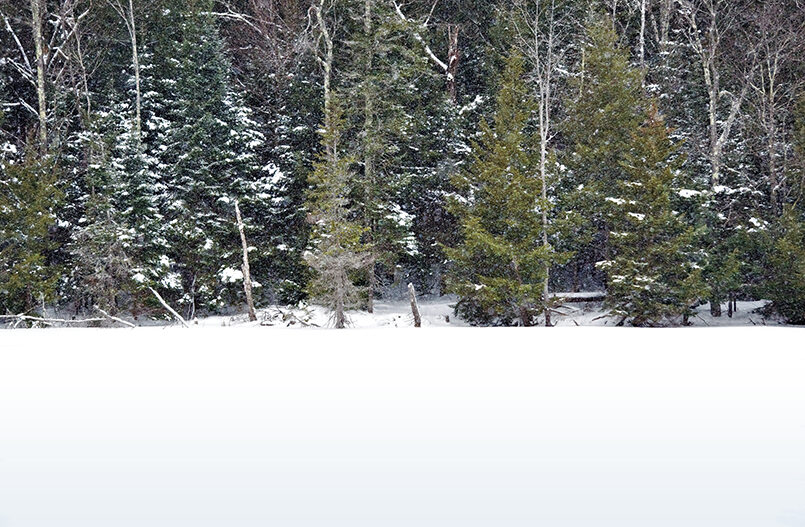 The Hemlock, one of the oldest trees in the Adirondack Park and among its most abundant and prominent conifers, is on the precipice of extinction.
By Anthony F. Hall

The Hemlock, one of the oldest trees in the Adirondack Park and among its most abundant and prominent conifers, is on the precipice of extinction.

“All Hemlocks are threatened by this tiny pest, the Hemlock Wooly Adelgid,” said Dr. David Orwig, who was the first to observe the presence of the invasive aphid-like insect in the Adirondacks. “It’s an equal opportunity feeder and killer.”

Orwig, an ecologist from the Harvard Research Forest in Petersham, Massachusetts, happened to be climbing Lake George’s Prospect Mountain in July, 2017, when he spotted a small cluster of Hemlock Wooly Adelgid (HWA) in a stand of three hemlocks.

Three years later, those trees were declared pest-free after being treated with pesticides. However, a camper alerted the Department of Environmental Conservation that very same summer to an infestation of HWA north of Shelving Rock. It has since been found at ten other locations around Lake George, most notably on Dome Island and most recently in June, 2022, on state-owned Turtle and Mohican Islands.

While confined, as of now, to the Lake George basin, HWA is expected to spread throughout the Adirondack Park over the course of the next few decades, Orwig and two other experts, Dr. Gary Lovett and Dr. Mark Whitmore, said at the Adirondack Invasive Species Summit on October 19, an event sponsored by the Adirondack Park Invasive Plant Program (APIPP) and held in Blue Mountain Lake.

“If I had to make a prediction, I’d say that HWA will continue to spread throughout the Adirondacks, if somewhat more slowly than it has south of the Blue Line,” said Orwig.

“Do I think that we’re going to see HWA up here? There’s no question in my mind,” said Mark Whitmore, Director of the NYS Hemlock Initiative at Cornell University.

If HWA is currently limited to Lake George and the southeastern perimeter of the Adirondack Park, that is due, in all likelihood, to the colder temperatures to be found in the park’s higher elevations.

But according to the experts, that’s an advantage that is at best temporary, one that climate change will erase.

(According to David Orwig, climate change has “one silver lining,” which is that as weather grows more variable – cold spells followed by heat waves, drought intersecting with intense rain storms – HWA mortality grows.  But, he added, even if a large part of an HWA population is killed, “it will come back quickly.”)

“It does get much colder as you go north from Lake George. But it won’t remain that way for very long. Warming temperatures will allow HWA to migrate farther,” said Orwig. “With warmer winters, HWA will continue to spread and lead to more hemlock mortality.”

The forces assembled by agencies, organizations and scientists in response to the discovery of Hemlock Wooly Adelgid on Lake George are likely to be deployed in other sections of the Adirondacks as HWA continues to spread.

“Hemlocks are a critical part of the environment, a foundational species upon which a myriad of other species depend for their lives,” said Mark Whitmore. “That’s why it’s important to maintain the Hemlock canopy. That is what we’ve done in the Lake George area.”

After the discovery of HWA in 2020 near Paradise Bay and, later that year, on Dome Island, the DEC, APIPP, the New York Hemlock Initiative, the Nature Conservancy and the Lake George Land Conservancy mobilized a coordinated and comprehensive survey to identify and treat infestations of HWA throughout the Lake George watershed.

“The equivalent in human labor of more than 300 days was devoted to managing those infestations that first year,” said Tammara Van Ryn, who leads the Keene Valley-based APIPP. “We know what kind of resources we need to mobilize if we are to be effective.”

In October, 2020, the DEC deployed five crews, composed of three people each, to Forest Preserve lands in the Paradise Bay area to apply insecticides to the bark of infested trees.

On Dome Island, where more than 60% of the forest canopy is composed of Hemlocks, the Nature Conservancy, which has owned the island since 1956, also elected to use insecticides.

According to the DEC, insecticides are, at present, the most effective method of controlling HWA. Two different insecticides, one fast-acting, killing the insect before it can reproduce, the other affording the tree long-term protection, are applied to bark near the base of the tree and absorbed through its tissue. When HWA attaches itself to the tree to feed, it receives a dose of the pesticide and is killed.

Whitmore said that the DEC has also treated infestations at Shelving Rock, the Buck Mountain trailhead and Long Island.

On October 27, 2022, a DEC barge was enlisted to give scientists from the New York Hemlock Initiative at Cornell University a lift to Red Rock Bay – with 2,000 Laricobius beetles swaddled in pine shavings in their coolers.

Along the shore, where conifers mix with hardwoods, the torpid beetles – no larger than flecks of sand – were released into the branches of the hemlocks.

Imported from the Pacific Northwest, these beetles are naturally engineered to prey upon adolescent and adult Hemlock Wooly Adelgid.

(In spring, two species of silverflies, also native to the Northwest, prey on the adelgid’s eggs. They, too, have been released on Lake George, once in 2021 and again in 2022.)

“We need both the beetles and the silverflies,” said Mark Whitmore, who founded the Hemlock Initiative’s laboratory in Ithaca in 2014 to research HWA’s non-native predators.  “The releases correspond to the life cycle of the HWA and complement one another.”

According to Whitmore, these biological controls offer the best hope of eliminating HWA as a permanent threat to the Adirondack Forest Preserve.

It may take as long as six years for a population of beetles to establish itself, said Nicholas Dietschler, a Research Support Specialist at the NYS Hemlock Initiative. But once established, the population will expand and spread beyond the original points of introduction, becoming a permanent check on Hemlock Wooly Adelgid.

“In their native range, the insects are known to effectively control HWA. That gives us reason to hope that we are heading in the right direction,” said Whitmore.

But, Whitmore cautions, “this is an experiment.”

Among the unknowns is the beetles’ capacity to survive cold temperatures, said Whitmore.

Although populations of Laricobius beetles introduced in the northern U.S.  appear to grow more slowly than those introduced in the south, scientists have confirmed that a population of beetles first released in the Finger Lakes area in 2016 has established itself, said Nicholas Dietschler.

Ordinarily, far fewer than 2,000 beetles would be released at any site at any one time, but as the likelihood that a certain percentage will perish from the cold is high, Whitmore and his staff decided to release more bugs than usual.

“Normally, we wouldn’t release 2000 beetles, but we’re really making a push at this northern edge of their range,” said Dietschler.

In addition to learning how predators interact with the prey, the NYS Hemlock Initiative is developing Environmental DNA tools that will enable it to determine if a population of predators has established itself in an affected area.

“You can release hundreds of thousands of predators into a forest, but it may be years before you find them and confirm they have survived,” Whitmore said.

With samples of the predators’ DNA, washed from the canopy, scientists will have evidence of their presence, even if unseen.

“Equipped with these tools, we could determine very rapidly when we have establishment,” said Whitmore.

“We’ve been working on these techniques for the past three years, and we think we’re at the cusp of success,” said Whitmore.

Because Hemlock Wooly Adelgid has not yet reached the higher elevations of the Adirondacks, APIPP, the DEC and other organizations responsible for combatting HWA have time to prepare strategies for managing the invasive when it does arrive, the experts at the October 19 conference said.

The Park’s Hemlocks should be surveyed, and the stands of highest priority identified. Early detection is essential. Infected trees should be treated with insecticides, gaining time for the hemlocks as biological controls are perfected. The bio-controls should be implemented as soon as populations start to emerge.

Were the Adirondacks to lose its Hemlock forests, it would not only be a visual blight, but an ecological calamity from which it would be difficult to recover, said Mark Whitmore.

“It took years of groundwork to mount a rapid response to HWA on Lake George, one that involved not only multiple agencies, but multiple departments within those agencies. But as soon as DEC whispered ‘HWA and Lake George,’ everyone snapped to it,” said Mark Whitmore.

That same level of response will be necessary if the Adirondacks’ forests are to be saved, the experts said.