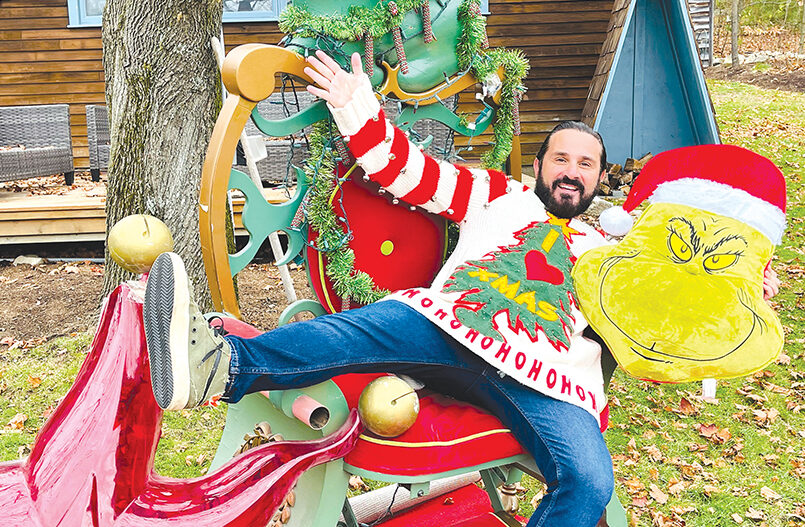 Holiday House Tour impresario John LaSalandra with some of the original “The Grinch Who Stole Christmas” memorabilia that will be on display on the tour.
By Lisa H. Hall

Five Bolton Landing vacation homes, all elaborately decorated for Christmas, will be open to the public during a self-guided Holiday House Tour on Sunday, December 4 from noon to 4 pm. Proceeds benefit The Hyde Collection.

Managed as short-term rentals, the homes are owned by the firm luxurylakegeorge. The tour has been organized – and curated – by luxurylakegeorge’s founder, John LaSalandra, a media personality who divides his time between Bolton Landing, Saddle River and Miami Beach.

“Everybody likes to celebrate the season’s holidays – we need them!” said LaSalandra.

“Anytime an organization or an individual wants to support The Hyde in new and creative ways, we try to be equally responsive,” said John Lefner, The Hyde’s Chief Operations Officer. “John’s creativity and passion resonated with us, and the homes are so beautiful, that we readily accepted his imaginative offer to support The Hyde. The Holiday House Tour is something people will really enjoy.”

One highlight of the tour will be a display of artifacts from the 2000 film based upon the children’s book by Dr. Seuss, “The Grinch Who Stole Christmas.”

A former movie set dresser, LaSalandra acquired the items from a prominent collector of Hollywood memorabilia.

Among the “Grinch” props and costumes: the throne upon which the Grinch, stuffed with desserts, was carried aloft by the citizens of Whoville; one of two hand-knit sweaters worn by actor Jim Carey; the young Grinch’s school desk; and the crimson star that streaked across the sky and crashed into Whoville.

According to LaSalandra, these items, created for Universal Studios, have not been seen for a quarter of a century.

LaSalandra said this year’s Holiday House Tour is the first he has organized for Bolton Landing, but is unlikely to be the last.

“In the future, we hope to have more homes included in the tour and engage even more members of the community,” he said.

LaSalandra added, “I can see this event growing to include vendors showcasing the work of local artists and artisans.”

In addition to Christmas exhibits and movie memorabilia, visitors will also see LaSalandra’s talents as an interior designer on display.

“You’ll be able to get some decorating ideas and compare kitchen layouts, among other things,” said LaSalandra, who oversaw the renovation and remodeling of the homes.

According to LaSalandra, each of the five homes is different, and each has a unique personality.

Blue Hill Farm will represent “Christmas in the Country;” Indian Brook Lodge is a Santa’s Workshop, transported from the North Pole; Bell Point Estate offers a balsam-scented, birch bark- accented Great Camp Christmas on the shore of Northwest Bay; the Sagamore Golf House’s many halls will be decked to the brim; and the Bolton Beach House will host Whoville.

LaSalandra said The Hyde was chosen to be this year’s beneficiary in part because he admired “its tradition of taking art, music and education beyond the walls of the museum and into the community.”

According to John Lefner, Hyde staff will be present in the five homes during the tour to answer any questions participants may have about The Hyde. “Hopefully, we can get our mission in front of everyone and encourage them to visit us while they’re enjoying the decorations,” said Lefner.

Tickets for Holiday House Tour are $25 per person. and are available from The Hyde Collection. For information, call The Hyde at 518-792-9171.