Watershed’s Progress on Salt Reduction Back on Track 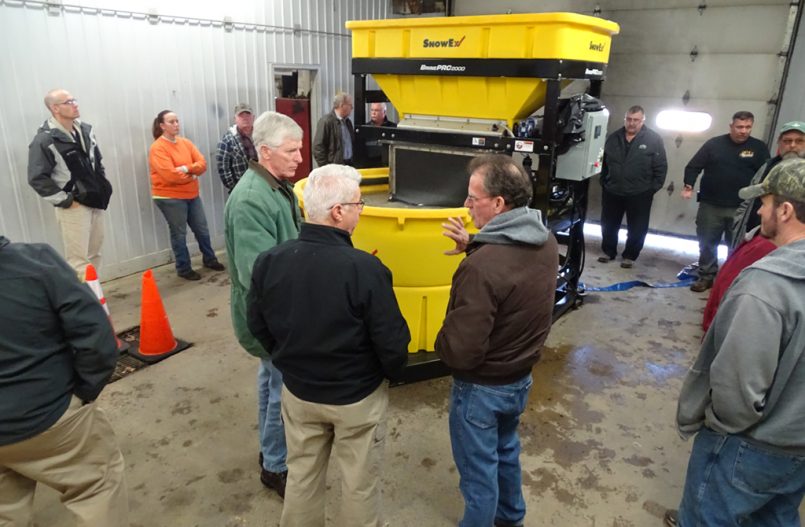 But when the watershed’s source of brine, a manufacturer called StreetTreet, was acquired by another company and deliveries to Warren County and its municipalities were disrupted, local officials, as well as environmental leaders, feared the progress that had been made within the past few years would be reversed.

On January 30, however, Wick said StreetTreet’s new owner, Apalachee Salt, had resumed the production and delivery of brine at a previously agreed-upon price of 25 cents per gallon.

Wick added that Warren County remains interested in creating “a regional road brining collaborative,” manufacturing enough brine to supply its own Department of Public Works as well as municipal Highway Departments throughout the Lake George watershed.

An industrial-sized mixer that would produce a consistent and affordable supply of brine for the area might be eligible for state grants, said Wick, who has discussed that possibility with Kevin Hajos of the Warren County Department of Public Works and Chris Belden of the county’s Planning Department.

Logistical questions – such as how the brine would be delivered to each highway garage, how frequently and at what cost – have yet to be answered, said Wick.

“We’re still in the early stages of discussion,” said Wick. “But I’ll be seeking the feedback of every Supervisor and Highway Superintendent in the Lake George Park in order to gauge the level of interest out there in a regional collaborative.  It’s an important enough initiative to have everyone in the room and everyone to have a voice.”

Lake George Waterkeeper Chris Navitsky said The Fund for Lake George was among the organizations supporting a regional collaborative, preferably one based at the DPW garage in Warrensburg.

Another option is to help each town acquire its own brine-making equipment – an option that would be the least cost-effective one, added Wick.

According to Wick, grants enabled municipalities to purchase the equipment used to spray brine along roads and sidewalks.

“Brine is applied to roads in advance of storms,” said Wick. “It helps prevent snow from turning to ice and it impairs the bonding of ice and road surfaces; that’s why it’s an anti-icing rather than de-icing measure.”

Because the solution uses one third less salt than traditional de-icing methods, “you spend a third less. The price of salt is currently $75 a ton and in the past, towns applied thousands of tons per year. So it’s economical. And less salt is getting into Lake George. That benefits the environment,” said Wick.

Although every municipal highway department is independent and makes its own decisions about how best to maintain its roads, “the highway superintendents have been very open minded. They see the benefit of trying a shift in their operations. As a result, we’ve seen a broad reduction in the application of salt across the board,” said Wick.

New York State’s Department of Transportation has begun applying brine to Route 9N as part of pilot project launched two years ago to reduce the application of road salt along the lake.

“Liquid treatments are the most effective because the brine stays put; it doesn’t scatter like road salt,” said Joe Thompson, DOT’s Project Manager for Snow and Ice Control.