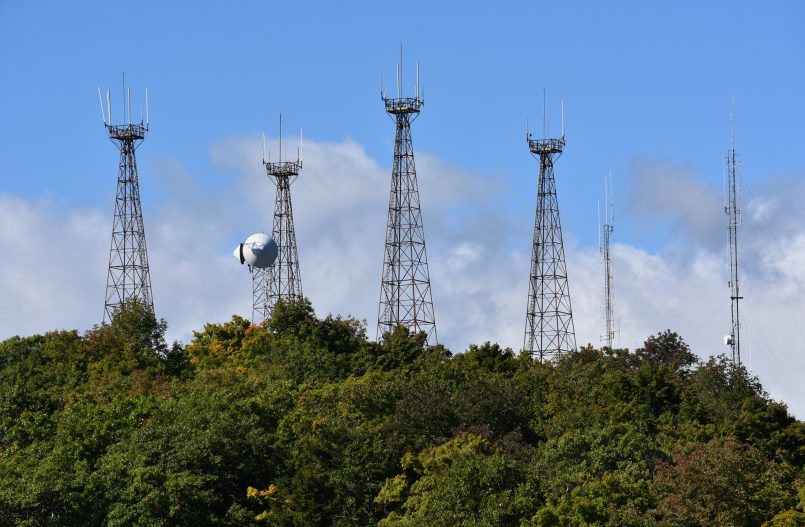 Warren County’s Board of Supervisors has approved a resolution calling upon the Adirondack Park Agency to relax its policies  requiring towers to be “substantially invisible” and to permit towers  ten to twenty feet above the tree line.

“We want a level playing field so that our communities can compete with other parts of New York State, allowing for private investment and more opportunities for businesses to grow and become profitable,” said Matt Simpson, the Supervisor for the Town of Horicon and the Republican candidate for the region’s seat in the New York State Assembly.

“If people, especially young people, aren’t able to get a cell signal, if they’re not able to communicate, they won’t come here,” said Monroe. “Visitors want the assurance that when they are hiking in the woods, they can communicate with first responders.”

But according to Willie Janeway, the executive director of the Adirondack Council, a profusion of cell towers visible across the landscape would have negative rather than positive impacts upon the economy.

“The Adirondacks’ visual appeal lies in its wild character; if we compromise that character more than we have already, there will be negative environmental and economic impacts,” said Janeway.

The APA’s current policies are reasonably balanced,  providing cell service in most hamlets and along most travel corridors without being visually obtrusive, said Janeway.

Rather than calling upon the APA to jettison its guidelines, Warren County should demand that state and federal governments subsidize service in the Adirondacks.

“To extend service to more communities and along more travel corridors, to make certain that businesses and year-round and seasonal residents, as well as travelers, have the connectivity they need, we need financial support,” said Janeway.

“The obstacle to better service has been economics,” he continued. “The carriers have lacked the financial incentives to prioritize the investment and technology needed in this region.”

“We think it’s a mistake not to screen the towers,” he said. “The APA’s current policies helped expand cell service in the Adirondack Park while keeping towers well screened.”

According to Craig Leggett, Chestertown’s Supervisor, the resolution adopted by Warren County is flawed precisely because “it puts the blame for the lack of cell phone coverage in the Adirondacks upon the APA’s policies, rather than upon the economics of extending cell service to the region. That’s the weak link.”

The scarcity and diffusion of customers is a problem compounded by terrain, said Legget.

“We do not have population large enough to provide these companies with a return on their investment; on top of that, with the terrain, with the mountains and valleys, it’s a difficult population to reach,” he said.

Legget echoed Janeway’s comments, stating, “We need to get these private companies to invest in our area. To do that, we have step in with public money.”

While local governments and environmental protection groups may disagree about the Adirondack Park Agency’s policies regarding the height of structures, they are in agreement about the necessity of  wiring Adirondack communities with broadband.

Broadband has been slow to arrive in Adirondack communities, where it is needed if the region is to develop a sustainable economy, said New York State Senator Betty Little.

“High speed broadband is an absolutely necessary element of any infrastructure. Without it,  we’re just missing opportunities for economic growth,” said Little, who serves on an Upstate Cellular Coverage Task Force created by Governor Andrew Cuomo to address the lack of cell service in this region and other rural sections of  upstate New York.

“Here in the Adirondacks, we’re without complete broadband coverage; many towns have been left out,” said Craig Leggett.

“New technologies are needed, now more than ever.

As Janeway noted, representatives from across the spectrum  worked to pass a constitutional amendment allowing lines for broadband and other public utilities to be installed within the rights-of-way of  roads and highways through Forest Preserve lands.

“When we can all work together, as we did through the Common Ground  Alliance to pass the constitutional amendment, we all benefit,” said Janeway.

According to Claudia Braymer, a Glens Falls supervisor ans the emocratic candidate for the Assembly, broadband is among Warren County’s infrastructure needs that should receive funding in the next federal financial stimulus bill.