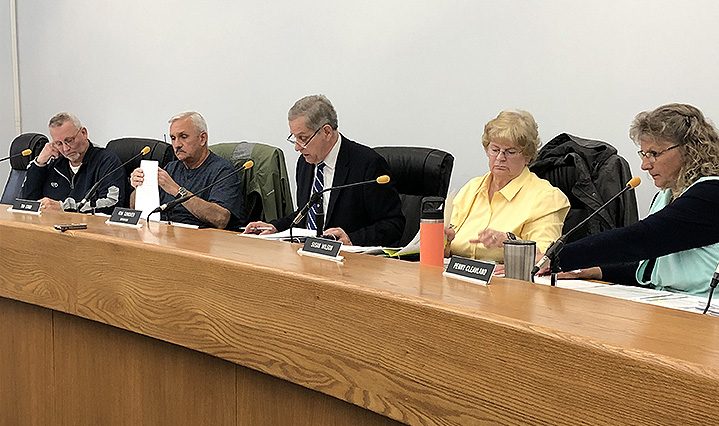 The Bolton Town Board votes to approve the septic inspection law.
By Anthony F. Hall

Forty years after banning “any individual sewage disposal system that is unsafe, a source of pollution to surface waters or permits seepage to surface,” the Town of Bolton has approved a measure that will actually enforce that prohibition.

On May 7, the Bolton Town Board voted unanimously to adopt a new law requiring on-site septic systems to be inspected and in compliance with state and local standards upon the transfer of the owner’s property.

Unlike the Town of Queensbury’s new ordinance, which limits mandatory inspections to lakefront properties, Bolton will require every septic system within the township to be inspected.

“85% of the town falls within the Lake George watershed, to be sure, but this ordinance will not only help protect Lake George,” said Sue Wilson, a board member and the town’s deputy Supervisor. “It will also protect other surface waters, the ground water and the soils.”

According to Wilson, the Town Board “wanted to place as light a burden  upon the community as possible, omitting, for instance, a requirement that every system, residential and commercial, pass inspections every five years.”

Sally Pepper of Coldwell Banker-King George Realty, for instance, said the definition of “transfer” too vague. And, given the speed with which transactions are conducted in a febrile real estate market such as Bolton Landing’s, she noted it could be difficult to arrange an inspection before a closing takes place.

Willie Bea McDonald of McDonald Real Estate Professionals commented that not enough consideration had been given to the costs and inconvenience of inspections.

In some cases, she said, inspections may involve “digging up paved driveways, moving landscaping and lifting decks.”

McDonald said a better alternative to manual inspections might be videography.

The scarcity of qualified inspectors, especially if other municipalities within the Lake George basin adopt similar laws, was also a matter of concern.

According to Supervisor Ron Conover, the inspection of all on-site wastewater treatment systems before a property is sold or transferred was a key recommendation of a committee of citizens charged with updating Bolton’s Local Waterfront Revitalization Plan. New York’s Department of State formally approved the plan last spring.

Pat Dowd, the Lake George Association’s communications director, addressed the board in person, stating, “Bolton plays a significant role in protecting the health of Lake George. It has the largest number of housing units in the watershed and the greatest number of onsite wastewater treatment systems in the watershed. But the LGA is encouraging every town within the watershed to consider a septic inspection program, because while untreated stormwater is by far the greatest human contributor to water decline in Lake George, nonfunctional septic systems present health and water quality problems too, encouraging weeds, algae and invasive species to grow. With laws like this on the books throughout the watershed, the potential for harmful algal blooms would be less as well.”

Supervisor Conover said four months should be sufficient to allow realtors and others to adapt to the new law,” as long as we aggressively get the information out there so that everybody knows what’s going on.”

Brochures about the new law and information about qualified inspectors will be provided to the public, the board said.

In the Town of Queensbury, homeowners are adjusting to its new inspection law easily, Conover said, seeking inspections even before their homes go on the market.

Over time, he said, inspections will become routine matters, ultimately reducing the number of aging or failing systems within the watershed.