Local Distillery, Breweries, Step Up to Help Out 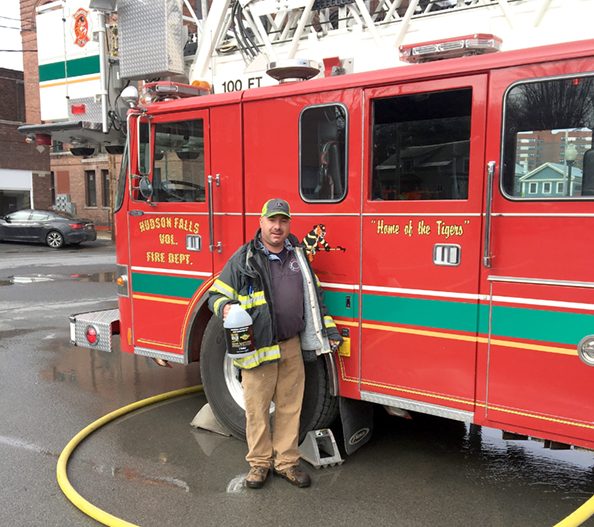 High Peaks Distillery is among the few businesses in Lake George still busy, and not because it’s manufacturing small batch bourbon.

These days, it’s making something equally if not more precious: hand sanitizer.

The shift in product lines happened in March, said John Carr, the distillery’s owner and the founder of its parent company, Adirondack Brewery.

“We were making small bottles of hand sanitizer, just to boost people’s morale. Then several organizations reached out to us, such as Hudson Headwaters Health Network, local fire departments and rescue squads, which were concerned about the lack of hand sanitizer. We quickly realized that there was a serious demand and a need for it. Since then, we’ve ramped up production so that we can process a thousand gallons a week,” said Carr.

To prevent the spread of coronavirus, the use of hand sanitizer is among the steps recommended by public health experts, said Jane Hooper, a spokeswoman for Hudson Headwaters.

“So John Carr and company are helping to keep our patients and staff safe and healthy as we fight the novel coronavirus,” she said.

Hudson Headwaters added in a statement, “We are grateful to have a community that is so eager to help during these challenging times. Together, we are building healthier communities.”

“We’re selling some sanitizer to subsidize the costs of making it for health care workers and first responders,” said Carr. “Can you imagine what would happen to our communities if we lose our volunteer fire departments and rescue squads to sickness? We’re just trying to get it to places where it can do the most good.”

Carr said new rules permit distilleries such as his to manufacture the product, using a formula approved by the federal government’s Food and Drug Administration.

“We basically take the alcohol that we normally use to make whiskey and add these other, prescribed ingredients to make the sanitizer,” said Carr.

The new product – not alone, but with other goods and services –  has enabled Carr to keep people working at a time when many small businesses are laying off or furloughing even long–time employees.

“We’ve been able to keep anyone on our staff who wants to work working. We’ve also been allowed to keep paying for our employees’ health insurance,” said Carr.

Carr has also joined with Brendan Murnane of the Bolton Landing Brewing Company, Bert and Christian Weber of Common Roots and other local breweries to produce a beer whose profits will benefit hospitality workers who lost their jobs because of the novel coronavirus.

“These aren’t people who can afford to stay home and not work,” said Carr. “They’re single moms. They’re families who depend upon that weekly paycheck. They’re hardworking people. And through no fault of their own, they lost their jobs.”

According to Carr, roughly $20 of every case sold will be deposited into a fund to benefit those out of work.

But Adirondack Brewery will do even more than donate hand sanitizer and proceeds from beer sales to help its community survive the coronavirus crisis, said Carr.

“We’ve offered the Warren and Hamilton Counties social services agency, which delivers hot meals to people in need, the use of our freezers so that frozen meals can also be distributed, reducing the numbers of visits to the houses of elderly and vulnerable people,” said Carr. “And if we could make 95 masks, we would do that. We’re chipping in as much as we can, trying to do our part and help out our community.”