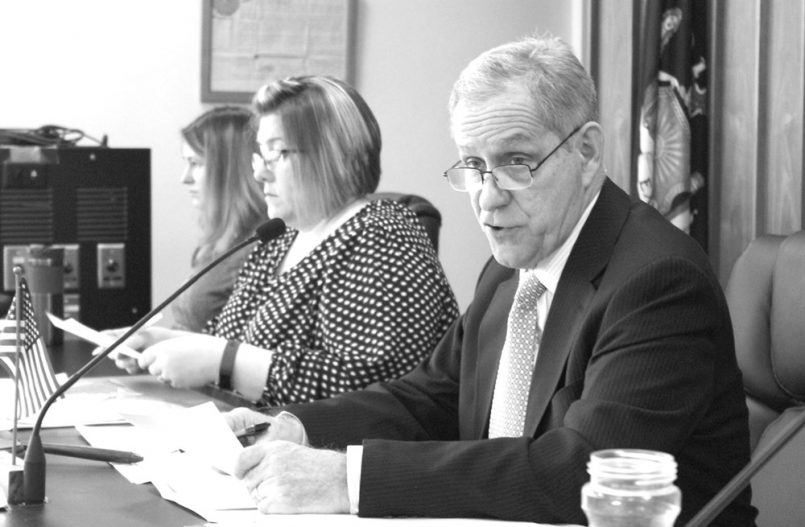 Property taxes in lake shore towns would increase “significantly” – perhaps by as much as 30% – if proposals now floated by some Warren County Supervisors were adopted, said Lake George Supervisor Dennis Dickinson.

According to the new proposals, a portion of the the sales tax revenue would be distributed to the county’s eleven towns, its village and city on a per capita basis and the rest according to assessed valuation.

But as the Warren County Administrator explained at a January 16 workshop for the Board of Supervisors, the lake shore towns would still be responsible for funding a disproportionately large share of county services.

“If you want my money, take my bills,” said Lake George Supervisor Dickinson said. “You can’t take my money and leave me with all the bills.”

Dickinson called the proposals “ridiculous; absolutely absurd. I can’t see why anyone thought these were good ideas.”

Kevin Geraghty, Supervisor of Warrensburg, the upcounty town with the largest population, argues that Bolton, Hague and Lake George receive disproportionately large sums of sales tax revenue because the current and statutory basis for allocating receipts is not population but property value, the largest share of which is, of course, to be found in the lake shore towns.

“I can’t see that a lakefront resident who is getting $1,654 back in sales tax revenue works any harder or pays any more sales tax dollars than anyone who lives in Warrensburg year-round,” he said.

Geraghty noted that Warrensburg is the most populous town in the county — and it is a commercial hub of northern Warren County, generating lots of sales tax revenue — but its residents aren’t receiving a fair share of the money.

If sales tax distributions were calculated on a per capita basis, as these supervisors say they should be, the current formula might be inequitable, according to figures supplied by Ryan Moore, the Warrren County Administrator.

Bolton Supervisor Conover argues that a failure to take into account the lake shore town’s expenses skews the issue in favor of the more populous towns.

“Yes, some towns receive more in sales tax, but that’s because they pay a far greater share of the cost of county government,” he said. “If you took all the sales tax revenue and put it against the $42.5 million tax levy, it would be proportionate. The share that lakeshore towns’ property owners pay to support county programs is very close to the shares of sales tax revenue their municipalities receive from Warren County.”

Conover continued, “Why should taxpayers in Lake George, Bolton, or Hague pay more than their fair share for services used by the entire county, for services that, in fact, receive little use by our residents, especially our summer residents? As a user group, that’s even smaller than our year-round population.”

Conover said, “Our residents already pay more per capita for these county services than the residents of other towns. Under these proposals, our share of the county levy would rise from 52% to 70%.”

In fact, as Ryan Moore told the January 16 workshop,

highway repairs, social service programs, even the county jail, are funded disproportionately by those paying the highest property taxes.

No matter where a social services recipient lives, Queensbury property owners pay 33% of the bill. If a highway anywhere in the county needs repaving, Bolton will pay 15% of the cost.

The county’s $42. 5 million tax levy has never been apportioned on the basis on population, or, for that matter, on a fee-for-service basis, Moore said.

Conover, who chairs the county Board of Supervisors, said he would not support any proposal that increases any family’s taxes above the limits of its property assessment or deprives any municipality of revenues.

He said the current formula should remain unchanged.

Horicon Supervisor Matt Simpson told the workshop that a distribution of sales tax revenues on a per capita basis would have an inherent bias against lake communities. That formula, he said, omits second-home owners, who swell populations seasonally.

Simpson, by the way, has a proposal that might, if adopted, defuse the controversy over how sales tax revenues should be distributed among Warren County’s municipalities.

According to Simpson, the original purpose of the tax – funding a county-wide obligation – could be restored and the current practice of witholding some or all of these revenues to offset property taxes should be dropped.

Warren County adopted a 3% sales tax in 1967 to pay for Medicaid, the Great Society program to support medical assistance to the poor.

Congress provided for a 50-50 match to the states, and among those, New York chose to charge half its share to the counties.

(A revision to the state constitution, had it been adopted, would have shifted the full costs of the program to Albany. That plan was rejected by the voters in 1968)

“The impact of Medicaid was hard to predict,” said Warren County administrator Moore. “In 1967, actual Medicaid expenditures far exceeded appropriations and the Board of Supervisors had to borrow in order to pay the bill. The debt service associated with these notes was included in the 1968 budget, and this was the backdrop against which Warren County adopted a 3% sales tax in late 1967.”

Municipalities are now entitled by law to 50% of the sales tax revenues, and most use at least a portion of their share of those revenues to support their town budgets. The county replaces these revenues, revenues which would otherwise fund county obligations, with a county property tax levy, Moore explained.

After Warren County adopted its sales tax, former Bolton Supervisor Deanne Rehm recalled, “a few Supervisors realized they would look better to their constituents if the sales tax went directly to each municipality. It could thus be used to reduce town taxes, even if, in reality, it raised the residents’ county taxes.”

But Ron Conover argues, “In the age of the tax cap, sales tax revenues have become an integral part of municipal finance. But it’s also a matter of home rule. State law allows the rown boards to decide for themselves how their shares of those revenues should be spent.”

Speaking for local business owners, Kathy Flacke Muncil, the CEO of the Fort William Henry Corporation in Lake George, urged the Supervisors to proceed with caution.

“Changes that might affect our tax burden create an unstable economic environment and hinder our ability to plan,” said Muncil.

If there are inequities in the distribution of aid, such as in reimbursements for highway maintenance or aid for equipment, these should be rectified through the county budget process, said Conover.