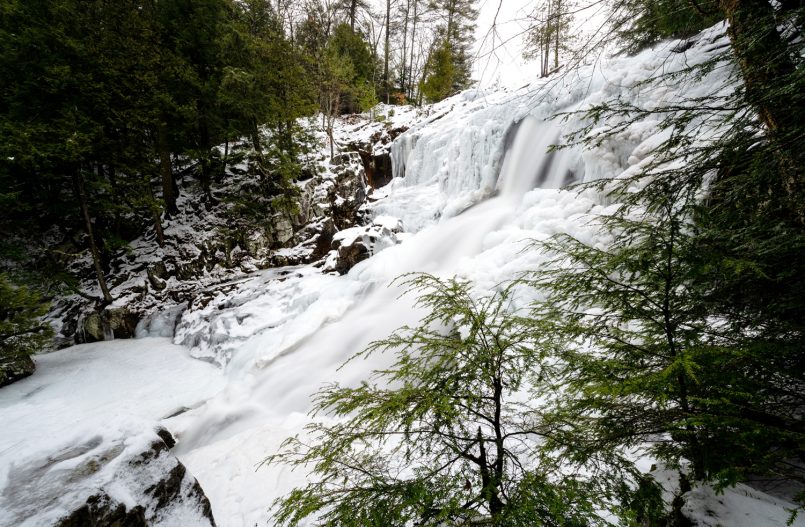 Hemlocks at Shelving Rock Falls, not far from the site where HWA was discovered several days ago.
By Anthony F. Hall

Hemlock Woolly Adelgid, or HWA, as the invasive aphid-like insect is called, has been found in a stand of eastern hemlocks on Forest Preserve lands on the eastern shore of Lake George, the state’s Department of Environmental Conservation announced August 11.

So far as anyone knows, it is only the second infestation of HWA to have reached the Adirondack Park. A small cluster of HWA was discovered in three hemlocks on Prospect Mountain in July, 2017. Those trees, however, were successfully treated with pesticides and declared pest-free earlier this year.

Last week, according to the Department of Environmental Conservation, a camper using iMapInvasives, a digital early detection mapping system that allows citizen scientists, educators and natural resource professionals to report invasive species locations, alerted the agency to an infestation north of Shelving Rock.

“That it was detected at all was pretty near a miracle,” said Dr. Mark Whitmore, the forest entomologist leading the Cornell University-based New York State Hemlock initiative.

Whitmore was on Lake George last week assisting DEC teams survey the extent of the infestation.

If allowed to spread, HWA would have significant ecological, aesthetic and economic consequences for the Lake George watershed, said Whitmore, who noted that hemlock is among the most important species of tree found in the southeastern sections of the Adirondack Park.

“You can’t but be impressed by how common hemlocks are on the shores of Lake George; if it’s not the most commonly found tree here, it’s right up there,” said Whitmore.

The loss of Lake George’s hemlocks to HWA would create a visual blight, Monica Dore, the Lake George Land Conservancy’s Conservation Manager, noted in an earlier interview with the Lake George Mirror.

“It would be pretty horrifying,” she said. “HWA leaves a tree looking lifeless, grey, drained of color; it looks like something that would fall apart if you shook it,” she said.

But both Dore and Alex Novik, the Conservancy’s Land Steward, have stressed the hemlocks’ ecological value in presentations on terrestrial invasive species.

“The hemlocks’ needles contain nutrients; they shade streams and cool waters for wildlife, they provide habitat for birds, they stabilize soils and protect water quality. HWA may initially attack trees, but the ultimate fall-out from their introduction and transmission is much more wide-spread,” said Novik.

According to the DEC, an initial survey of the Lake George shoreline found three infested hemlocks near the campsite.

“If the infestation is limited, it will be manageable, if we move rapidly,” said Whitmore.

But, Whitmore emphasized, “We have just begun the survey process. We have yet to check on the islands and the interior of the eastern shore. This will take a few weeks.”

A thorough survey, ascertaining the size and extent of the infestation, will enable an inter-agency group and its advisors to determine the best method of managing the infestation, the DEC stated.

According to the DEC, insecticides, applied to bark near the base of the tree and absorbed through its tissue, remain the most effective method for controlling HWA.

In addition to the hemlocks on Prospect Mountain, chemicals have been used by both the DEC and the Office of Parks, Recreation and Historic Preservation to control the spread of HWA at a number of sites, state parks included, the DEC said.

Whitmore added, “We hope that these predators or perhaps others we may identify will have a widespread impact on HWA and offer long-term survival for eastern hemlock populations.”

Current experiments seek to determine if the flies can survive at higher elevations.

According to Mark Whitmore, the goal of the new lab is to develop and release predator species throughout New York capable of controlling HWA populations.

Even after the predators have successfully established themselves, monitoring of the watershed’s forests, stream corridors, wetlands and shorelines, by the Lake George Land Conservancy, the DEC and others is expected to continue.

“As a land trust, we protect lands from threats of all kinds, including HWA,” said Jamie Brown. “We want to work with every not-for-profit group and municipality in the area to get the word out about this invasive’s potential impacts.”

According to the DEC, climate change contributes to the dispersal of Hemlock Wooly Adelgid and the growing size of local populations.