Home Share Tweet
Next Story Before it was a Smithsonian Exhibit, America’s Oldest Surviving Warship was a Local Roadside Attraction

Watershed to be surveyed, monitored 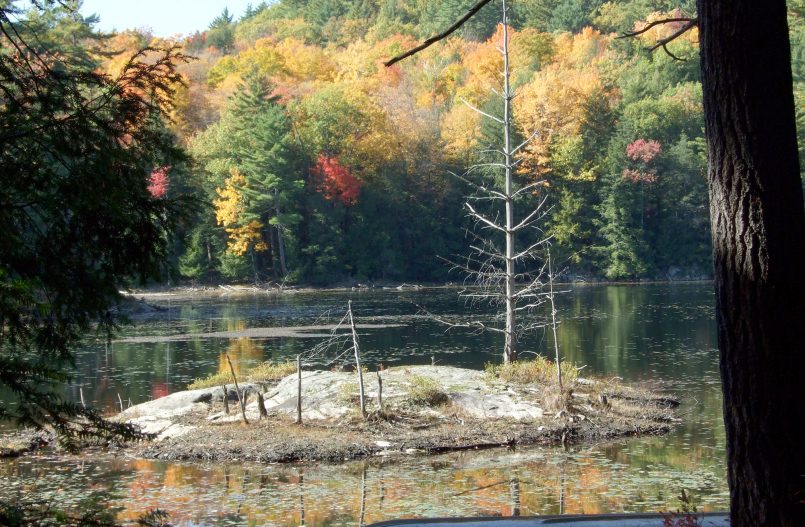 Wing Pond, in the 1,300 acre Northwest Bay tract, protected by the Lake George Land Conservancy in 2000 and now part of the Forest Preserve, is typical of water bodies on the perimeter of the Adirondack Park: it’s fringed with hemlocks, as well as with white pines and hard woods.
By Anthony F. Hall

After five hundred hours and twelve days on Lake George, surveying more than 16 miles of shoreline, state and local experts on invasive forest pests have concluded that an infestation of Hemlock Wooly Adelgid detected in August is a limited one and can be treated with pesticides.

“The Department of Environmental Conservation and its partners are planning treatments to start this fall, before HWA has the opportunity to spread the following spring,” the DEC stated in a September 10 press release.

“the infestation is limited to an area from Red Rock Bay to Black Mountain Point.”

After the initial discovery of HWA ( as the invasive aphid-like insect is called) in a stand of eastern hemlocks on Forest Preserve lands on the eastern shore of Lake George, thorough surveys of hemlock stands  have been conducted on nearby islands and along 16.3 miles of shoreline to determine the extent of the infestation, the DEC stated

According to Whitmore, HWA emerged on Lake George  roughly five years ago, probably transported by birds to the shoreline, where the densest clusters of insects were found and where, in all likelihoood, the infestation began.

“The good news is that the surveys have discovered the actual extent of the infestation,” said Jamie Brown, the executive director of the Lake George Land Conservancy, who also took part in the surveys. “I have faith in everyone involved with managing this infestation and feel confident that,  despite its size,  it can be responsibly treated.”

According to the DEC, the infestation has been found within a 250 acre section of Forest Preserve lands.

“A fair number of trees  have been infested, but certainly not every tree within the 250 acre parcel. But even in large areas, HWA can be treated, although the treatment of large infested areas can take time, even years, depending upon the number of trees to be treated,” said a member of the survey team, who was not authorized to speak about the effort.

It is expected that treatment will consist of insecticides which can be applied to bark near the base of the tree and absorbed through its tissue. When HWA attaches itself to the tree to feed, it receives a dose of the pesticide and is killed.

Presticides are, at present, the most effective method for controlling HWA, the DEC stated in an August 11 press release announcing the discovery of  HWA on the east shore.

Natural Predators to be released in Lake George watershed

Whitmore said predators will  be released in the Lake George region sometime this fall or next spring.

“We’re not certain, at this point, if the flies and beetles will establish self-sustaining populations in the Lake George basin. This is an experiment,” said Whitmore.

HWA Surveys from Air, Water and Land to Start

In order to monitor the spread of HWA within the Lake George basin, new surveys from both ground and sky are planned.

The survey from the ground, to be conducted from water and land, is expected to be led by DEC and the Adirondack Park Invasives Plant Program APIPP.

The Lake George Land Conservancy will participate in a basin-wide survey, and, of course, continue its surveys of its own preserves, which it commenced in 2017, said Jamie Brown.

“As the second largest land owner in the Lake George basin (after New York State itself), we started a comprehensive program to monitor the 4,000 acres of land we own or are  responsible for managing; and, of course, we’re available to help the Department of Environmental Conservation and private landowners as well,” said Brown.

According to Eric Siy, the executive director of The Fund for Lake George, “a comprehensive pilot project using satellite technology is now being planned to enhance ground surveys. The multi-stage program includes ground surveys this fall and early next year.”

“The initiative is being developed by a consortium of  groups from the public and private sectors as we speak,” said Siy, whose organization is one of those groups. “To help ensure that the full extent of the HWA infestation is understood, high tech remote sensing tools and modeling will be employed in the earliest possible time frame. Public announcement of the project is expected soon.”

Siy continued, “If we lose the hemlocks at Lake George, we lose Lake George as we’ve known it for many generations. It’s the dominant tree of the watershed. We need to employ every tool at our disposal to get ahead of the spread and make Lake George an example for others to learn from and follow.”

“There’s no silver bullet that will enable us to dispose of the problem of HWA once and for all,” said Jamie Brown.

Containing  the spread of terrestrial invasive species is challenging in part because, “There is no single point of entry, no obvious vector and no clearly-defined boundaries confining the Hemlock Wooley Adelgid to any one place,” said Brown.

“Alex Novick, our land steward, is surveying the watershed, but we’ll need boots on the ground to inspect each preserve and to ground-truth whatever high technology may tell us,” said Brown.

The Conservancy is actively recruiting volunteers to help its staff to monitor its thousands of acres.

“HWA won’t always be  found along the trails; it’s likely to show up in remote, hard-to-reach places. A successful monitoring program will take a special group of volunteers,” said Brown.

Relying upon mapping and monitoring is necessary, but so, too, is public education, said Brown.

Information about detecting HWA, schedules for citizen science training sessions and instructions for reporting signs of HWA can be found on the websites of LGLC, APIPP, DEC and NYSHemlockInitiative.