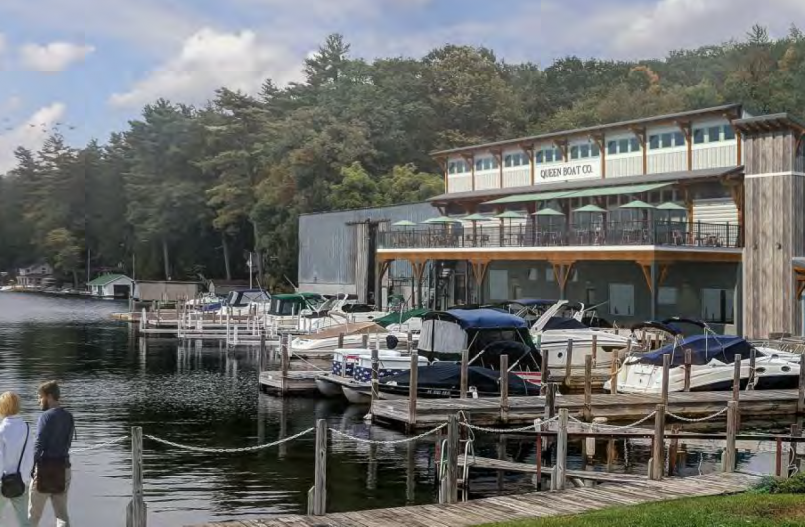 Queen Boat Company,  for many years the site of the Howards’ Dunhams Bay Sea Ray dealership and before that, Donald Pensel’s marina, has won approvals to  complete the renovations of its building and expand its fleet of Freedom Boat Club-owned vessels.

Approvals were granted by Queensbury’s Zoning and Planning Boards in November and by the Lake George Park Commission in  January.

According to the resolution adopted by the Lake George Park Commission,  the Freedom Boat Club (which co-owner Matt O’Hara describes as “a country club on water,” or “nautical time-shares),  is now permitted to offer shares in 20 boats, eight more than the twelve boats authorized by the  Commission last year.

Queen Boat Company will reduce the number of  berths rented to off-lake boat owners by 14 – from 28 to 14 slips.

As a result, the Park Commission stated, twelve fewer vessels will be operating from the Dunhams Bay site than in 2018, the year Matt and Rebecca O’Hara bought the marina from Karen Howard.

Congestion in Dunhams Bay is still a matter of concern, said Queensbury residents who spoke at the January 28 Lake George Park Commission meeting.

With the addition of twenty club boats to the bay, “you’re taking out seasonally-berthed boats that were used, on average, two and a half times a week and bringing in 20 boats that will be used one and a half times a day. When you look just at the numbers, you’re increasing boat traffic,” said John Collins, an Assembly Point resident.

“We know that the South basin is over-crowded in many areas, but we lack good data,” said Collins. “So it’s important that we take a step back and look closely at the situation before we exacerbate the problem. The lake is a limited resource and it’s one we all share.”

The Commission concedes that the number of boats using Dunhams Bay exceeds that bay’s capacity, at least according to a formula that says every boater needs at least 13 acres to himself to boat comfortably and safely.

But a Commission document stated that only 6% of the boaters responding to a 2015 survey found the area congested, perhaps, the author surmised, because its 5 mph zone influenced perceptions of crowding.

When asked by Lake George Waterkeeper Chris Navitsky if Commissioners use analytical tools such as the 2016 Water Based Recreation Study when weighing applications,  chairman Bruce Young said,  “the overriding factor is common sense. We ask, ‘Is this going to be detrimental or not?’ There are a lot of gray areas.”

“Our business does not make money the more people go out. We prefer that people use the boats less. They’re paying a fixed monthly fee regardless of how often they use the boat,” he said.

Members of Freedom Boat Club will now have a place of their own where they can relax before or after their cruises, thanks to the renovations approved by local boards.

Meyer reassured neighbors that the new clubhouse, which includes an outside deck, will not be a commercial restaurant or carry a liquor license.

Its greatest impact will be the improved appearance of the building, he said.

Construction is expected to begin this fall, said Mike Phinney, the founder of Phinney Design Group, the firm responsible for the renovations.

“It’s a modern re-use of an older building, parts of which are sound,” said Phinney.  “We’re introducing some  Adirondack elements, or a contemporary interpretation of an Adirondack-influenced design, which will be combined with the building’s industrial  elements.”

“It’s going to be a substantial facelift,” said Phinney.