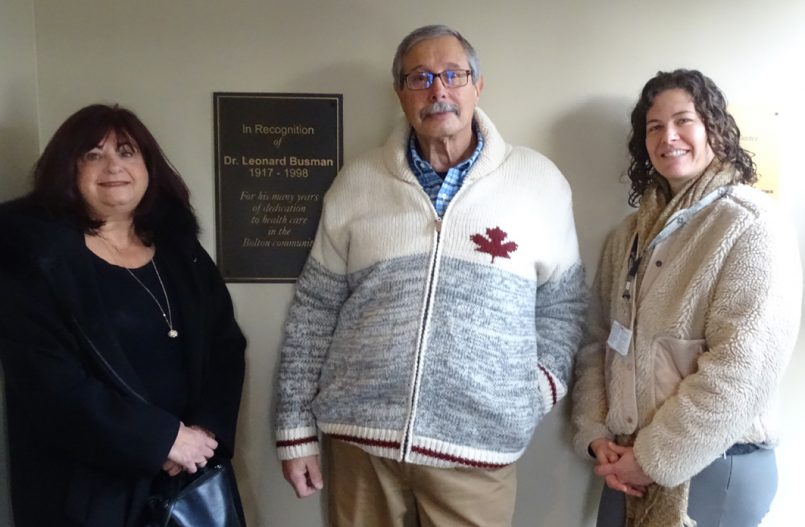 Reaffirming the many connections between the Hudson Headwaters Health Network’s  Bolton Health Center and Dr. Leonard Busman (after whom the health center is formally named), a plaque was installed in the building’s foyer over the Thanksgiving holidays honoring the town’s longtime family physician.

Unwilling to leave his town without medical care as he approached retirement, Dr. Busman supported the creation of a network-operated health center in Bolton, moving his practice there in the mid-1980s and continuing to see patients long after the planned date of his retirement came and went.

During World War II, says his son Bruce,  Dr. Busman was a flight surgeon. After the war, while  practicing medicine in New York City, he learned that several towns in the southern Adirondacks were in need of a physician.

The husband and wife team who served Bolton and the surrounding towns during the war had just died in an automobile accident, leaving the communities without a single doctor. The local governments pooled their resources to place an ad in the New York dailies pleading for help, and Dr. Busman responded.

With his wife Mildred (an Arkansas native whom he had met during medical school in Little Rock) and the first of their three sons, he drove north.

“They came up in the middle of February; it was 20 degrees below zero and there was five feet of snow on the ground, the likes of which my mother, a southern belle, had never seen,” said Bruce Busman.   “My mother later recalled that she told my father, ‘we’re not moving here.’ Two months later, they came back for good.”

By 1948, Dr. Busman had an established practice, housed in a tidy building on Main Street, managed by his wife.

“My father’s first love was my mother. His second was medicine,” said Bruce Busman. “He delivered between three and four hundred babies in their families’ homes. The last of those was Jeanine Gates, the daughter of Bill and Dawn Gates, who lived next door to their diner. That’s what a small town medical practice entailed. When called upon, and he was, my father could deliver a calf. Patients paid his fees in potatoes, cords of wood, chickens and bushels of corn, as well as in exchange for services, such as snowplowing. One day, the sculptor David Smith walked into his office and slammed a two-feet tall steel sculpture onto the desk and said, “That $500 that I owe you? Take this. It’s worth more than that now and it will be worth even more later.’ My father replied, ‘Get that rusted piece of junk off my desk and pay me what you owe me.’ When my mother heard about that, she was horrified. She and my father were very good friends with David and his first wife, Dorothy Dehner, and she admired the art of both. That very same piece, by the way, sold for $5 million 15 years ago.”

Stories about Dr. Busman can be found everywhere. In his 1998 book, “Lake George Reflections,” for instance, the late Frank Leonbruno noted that Busman was “the local expert in fish hook removal,” a skill highly prized in a lakeside community such as Bolton Landing.

The Busmans raised their three sons in Bolton Landing. After Dr. Busman’s death in 1998, Mrs. Busman moved to Virginia to be near them and their families. She died there in 2016.

According to Jessica Rubin, a vice president of Hudson Headwaters Health Network, it’s not surprising that the story of Bolton’s health center is intertwined with the town’s lives and legends. Everyone of the network’s eighteen health centers has a rich history, woven into the fabric of their home communities.

Bolton is still served by a family physician, Dr. Ryan Donnelly, a teeenager when Dr. Busman passed away in 1998.  Busman’s spirit – and the spirit of small town medicine itself– abides in the building nonetheless, as the new plaque in the foyer attests.