How will the Hub work? See “Amy’s Adventure Race for the Lake” 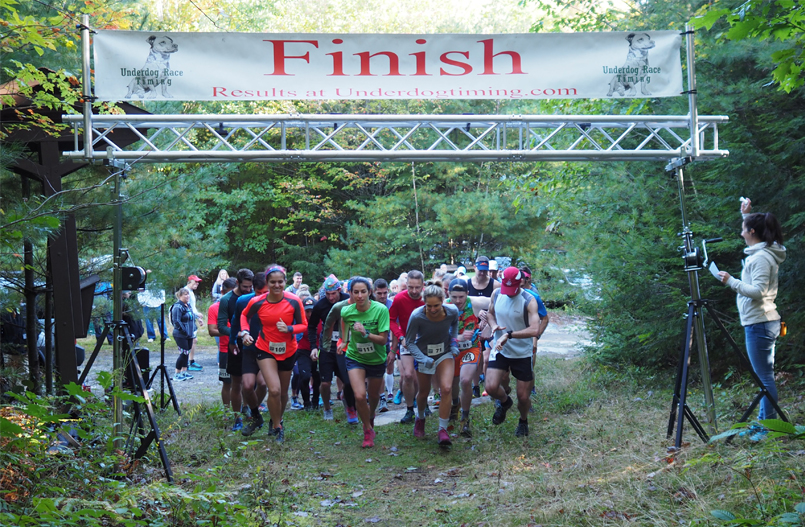 The start of the 2018 Amy’s Adventure Race for the Lake. This year’s race was a benefit for the Bolton Recreation Hub Strategy.

The third Amy’s Adventure Race for the Lake, an event created by the Lake George Land Conservancy’s Next Generation Committee in 2016, was held September 28 at the Conservancy’s Amy’s Park Preserve in north Bolton.

The event was launched to affirm the links between recreation and conservation, demonstrating to younger residents that land conservation is necessary if open spaces are to be preserved, wild life habitat protected and water quality improved.

This year’s event was a benefit for the Bolton Recreation Hub Strategy, a plan prepared by the Chazen Companies for the Lake George Land Conservancy, the Bolton Landing Chamber of Commerce  and the Town of Bolton to help Bolton establish and market itself as a recreational hub in the southern Adirondacks.

According to Michele Vidarte, the Conservancy’s Community Engagement and Events Manager, the event raised an additional $4,000 for the initiative.

“This year, the race was a great opportunity to showcase the new, larger  Amy’s Park parking lot and the new kiosk, which the Next Generation Committee help fund. It’s really nicely built, and we’re proud of it,” said Vidarte.

Vidarte said the new parking lot is located nearer the pond, which facilitates the launching of canoes and kayaks.

“The event is also a great opportunity to talk about the work of the Lake George Land Conservancy in  general and the Bolton Recreational Hub Strategy in particular,” said Vidarte.

Vidarte said the new kiosk and parking lot are examples of improvements to infrastructure made possible by the Conservancy’s investments.

With each improvement, Bolton grows better equipped to accommodate the recreational visitors whom the town hopes to attract, she said.

Vidarte said the Next Generation Committee has identified the Bolton Recreational Hub Stratefy as an important priority.

“It’s a natural fit, because our members are not only interested in getting people onto the preserves through an event like Amy’s Adventure Race but networking and enjoying everything Bolton Landing has to offer,” said Vidarte. “Our goals are entirely consistent with the goals of the Bolton Recreation Hub Stategy.”

For instance, Vidarte said, the Recreation Strategy hopes to channel recreation visitors from the trails to the hamlet’s shops and restaurants, something Amy’s Adventure Race for the Lake also does.

“We hold our post-race celebrations  at the Bolton Landing Brewing Company, which everybody loves,” said Vidarte. “Both out on the land and at the Brewery, we’re promoting the initiative because we’re demonstrating how the land and the town are connected.”

Vidarte said Amy’s Adventure Race for the Lake may expand to include a variety of events, both to attract more athletes and to retain the enthusiasm of those who already participate.

As the athletic event expands, opportunities for more local businesses  to participate may emerge,  demonstrating even further the commercial potential of recreational tourism, said Brown.

Photos from thos year’s event as well as the complete list of competitors and their times can be seen on the Lake George Land Conservancy’s  page on Facebook, @HikeLakeGeorge.