Above & Beyond Challenge Ends on a High Note 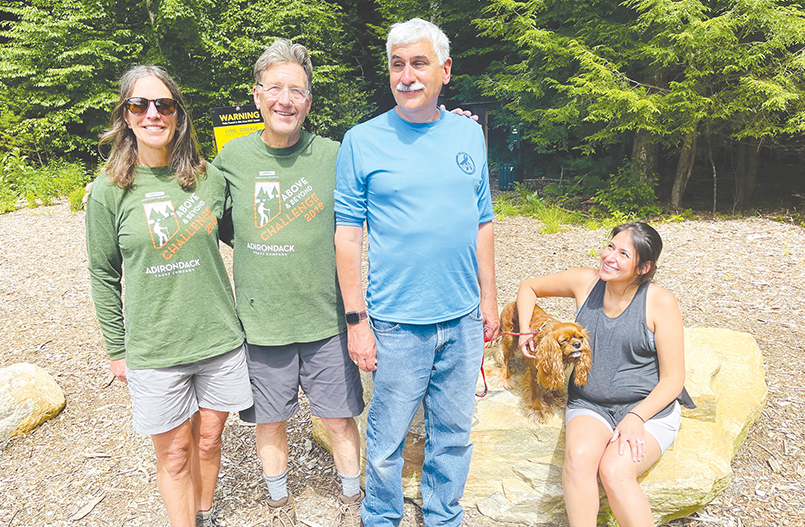 Carolyn and Steve von Schenk, founders of the Above & Beyond Challenge, at the trailhead to Bradley’s Lookout in Bolton Landing with Angelo Calbone and Celia Vincek.
By Anthony F. Hall

After a hike to Bradley’s Lookout with Saratoga Hospital CEO Angelo Calbone, the Above & Beyond Challenge was retired by its founders, Diamond Point residents Steve and Carolyn von Schenk.

“Angelo Calbone is retiring from the hospital after 16 years at its helm, and part of his legacy will be the new fund. With his help, this last Above and Beyond hike raised an additional $6,000,” said von Schenk.

The Adirondack Trust Company, where von Schenk served as president and CEO, was a sponsor of the hike to Bradley’s Lookout.

Funds raised by the Challenge for the Addiction Medicine Program came largely from corporate donors such as Adirondack Trust Company. Stewart’s Shops, the Lake George Steamboat Company and Roohan Realty were among the Challenge’s other donors.

“The sponsor could choose a peak and when we reached the summit, we would unfurl a banner thanking the donor, which we photographed and spread across the various social media platforms,” said von Schenk. “It was a way to raise money for a charitable cause that’s unlike the usual gala or golf outing.”

Over the course of five years, the Above and Beyond Challenge raised roughly $170,000 for the Addiction Medicine Program.

As the founders of the Challenge, the von Schenks also contributed significant sums to support the program.

Von Schenk said he and Carolyn chose to support Saratoga Hospital’s Addiction Medicine Program because “it treats addiction as a disease, not as a moral failing. It serves people in recovery who need ongoing counseling and treatment.”

The Challenge invited recovering patients, their families and friends, to join the von Schenks on a hike.

The hikes were meant to be therapeutic, but not regimented or mandatory, and no more clinical than a group  ramble.

“Carolyn and I are 46ers; we really love hiking the Adirondacks,” he said. “So, we thought that we might be able to use the Adirondacks to help heal people, while, at the same time, raising awareness of and funds for Saratoga Hospital’s Addiction Medicine Program.”

Out-of-doors, those joining the hikes were “nothing more nor less than hikers. They were not defined by addiction or even identified as patients. They were not sitting in a circle discussing issues or feelings, they were just experiencing the healing beauty of the Adirondacks,” said von Schenk.

“Some may not have hiked in some time. They might have found it rough going. But at the summit, they could say, ‘this is unbelievable; this is magical.’ And that’s what the road to recovery is like. It’s hard work, but what a pay-off,” said von Schenk.

“Our Challenge was meant to reinforce these kinds of spiritual, healthy, holistic approaches toward addiction and recovery,” said von Schenk. “It was meant to affirm the historical relationship between the Adirondacks and the pursuit of physical, spiritual and mental health.”

Since the program’s inception, more than 100 individuals have participated in one or more hikes.

As Angelo Calbone was instrumental in the creation of

Saratoga Hospital’s Community Health Center, where the Addiction Medicine Program is housed, it was appropriate that he participate in the Challenge’s last hike, said von Schenk.

But Calbone’s participation, and that of his daughter Celia Vincek, was fitting for another reason as well.

“We lost him seven years ago,” said Calbone.

For the hike to Bradley’s Lookout, Calbone wore Sam’s hiking shoes, which had not been worn since his trek through the Andes, shortly before he passed away.

The new fund – known as The Sam Calbone Addiction Medicine Patient Fund – has been established to support individuals recovering from substance abuse.

Led by the Saratoga Hospital Board of Trustees chair Michael Toohey, the goal is to raise $200,000 before Angelo Calbone retires.

Income from the endowment supports the personal needs of individuals being treated through the Addiction Medicine Program into perpetuity.

“Some who use the program lack the money for food, for their medications, for transportation. They already struggle,” said Calbone. “Our wish is that whatever funds are raised, they be used to support people at the most basic level. Our hope is that we can be among those accomplishing something good in this world.”

Von Schenk said the hike with Angelo, Celia (and Enzo, the family’s dog) “was just a good way to end the Above & Beyond Challenge.”

Calbone credited the von Schenks and the Above & Beyond Challenge for helping to inspire the creation of a fund in his son’s name to aid patients overcoming substance abuse. “This idea of naming a fund for Sam would not have taken the form that it has without your example and your support. So thank you,” he said.